Restaurant Daniel. For anyone who has ever dined here, you know, it’s that one name, one word that embodies so many descriptors. Exquisite, lavish, classy, opulent, wealthy, elegant. It’s a place that should be on everyone’s list when it comes to fine dining in America (assuming of course, you have that list!) There’s something about the main dining area that makes you feel like you’re living in the affluent and prosperous Roman Empire days. Perhaps it’s the large, white, coliseum pillars that outline the room or maybe it’s the high vaulted ‘church like’ white ceiling? In any case, it is hands down one of the fanciest and classiest restaurants in New York City and if you ever have the opportunity to eat here, you definitely should!

The restaurant itself has many rooms. There’s the quaint, upscale bar area, which is a bit reminiscent of the 1970s bar in the movie, The Shining, as there are only four bar chairs and there’s a dim yellowish/greenish lighting. Then there’s the luxurious, and extensive main dining room and the private rooms that can be rented out for special occasions, like the Bellecour room, off the restaurant’s lounge, which is named after the historic town square located in the hometown of Daniel Bloulud’s hometown, Lyon to the super exclusive Skybox which offers a bird’s eye view of the Daniel kitchen, and is easily one of the most unique dining experiences in all of New York City.

On the random Monday evening we dined here, our party was lucky enough to have a table front and center in the dining room, which allowed a wonderful 360-degree view of everyone around us. On the walls surrounding the dining room area, which is squared off by the Romanesque pillars, are large artwork masterpieces of miscellaneous things, along with lots of beautiful plants and flowers, giving the room a nice, soft touch. Looking up, the ceiling is also reminiscent of the Ancient Roman Empire, but oddly enough the magnificent curricular chandeliers that hang from the ceiling have a playful 1970’s disco ball feel to them, it’s quite the dichotomy.

The restaurant, which is only open for dinner, offers three options for dining, the prelude, before 6pm three-course prix-fix, the four-course tasting, or the seven-course tasting menu prepared by the chef. (There is also the option of pairing wine with your meal). We opted for the four courses which was ever so perfect for us. (For four courses we were there for three hours, I can’t imagine how long seven courses would take, we might need to sleep there!) Luckily the menu is arranged in terms of first course, second course and third course so that you aren’t completely confused where to start. All options sound so uniquely spectacular, it really was hard to choose just three! (Ask your waiter for recommendations, I allowed him to choose my entire menu. The man has been there for most of his life, he definitely knows what’s up!)

Once we ordered our three main courses, they came by with mini mushroom tarts to start accompanied by a poached lobster dish with seasonal green vegetables. After that we were given a taste of their chilled pea soup with smoked cheese. It was beautifully pureed and tasted like the peas had just been picked from the local garden. Delightful, pallet cleansing starter.

For the first course, the very respectful cordial, knowledgeable, and direct waiter suggested the New Orleans Crayfish with Pike Mousseline, Wild Daylilly, Crystalline Tempura, and Fava Beans. The dish was such an incredible burst of flavor. It had a creamy taste up front, mixed with a slight fishy taste from the crawfish, and a crispy flavor from the tempura. The seasonal veggies also added a nice, earthy finish. It was a bit like eating a creamy Mexican dish exploding with cream and tons of spices. 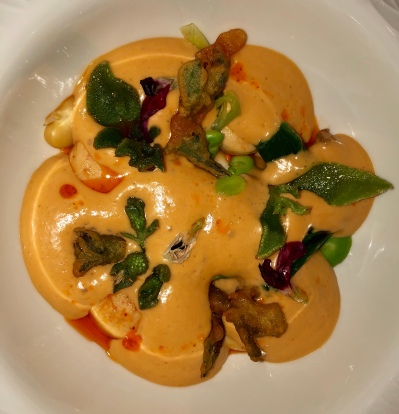 For course two, our lovely waiter recommended the white asparagus, which is in season this spring. Europeans go crazy for white asparagus when the season begins. In fact, it is so revered that full blown festivals mark the season. Chefs go crazy for this mild, colorless, almost sweet tasting vegetable. What is white asparagus you might ask? Its asparagus that never sees the light of day as it’s grown underground. Growers cover the spears in mounded dirt or black plastic tunnels so that they’re not exposed to light and don’t produce chlorophyll (which would turn them green). As delightful as this vegetarian dish sounded, it’s also not everyday you see squab breast on the menu, so I went with that. (For those of you unaware, squab is a young pigeon, it cuts like duck meat, hearty, dark meat poultry). Apparently, it’s a very difficult meat to cook, so you will very rarely see it on the menu. (Interesting how Michelin restaurants serve ‘flying rats’ on their menu, huh? I digress). The broiled squab was served medium rare and had a delicious skin on it, made of a French curry spice blend. The dish also came with a delightful green puree and fresh green asparagus. 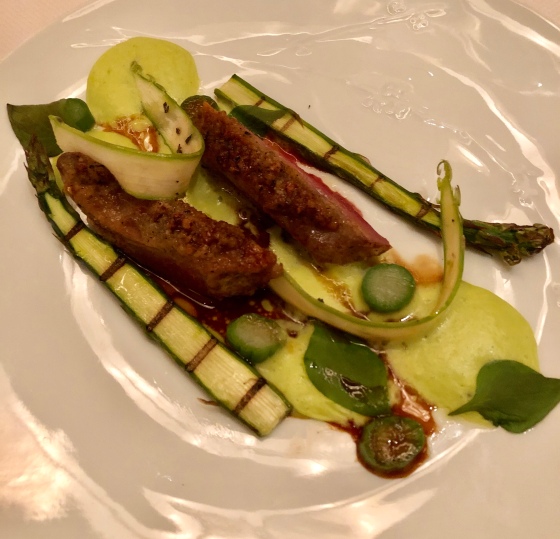 Course three offered so many unique and creative dishes. The quail was stuffed with foie gras in a pastry like casing. It was served with cabbage and mushroom on the side with a splash of white wine and sherry sauce both on top and to the side of the meat. It came with a side of ‘crispy rice’ that was almost like eating Rice Krispies with a delicious cheesy finish. Another diner at our table ordered their notable Elysian Fields Farm Roasted Lamb Chop with barley, young radishes, and nettle emulsion, which well a picture does equal a thousand words… 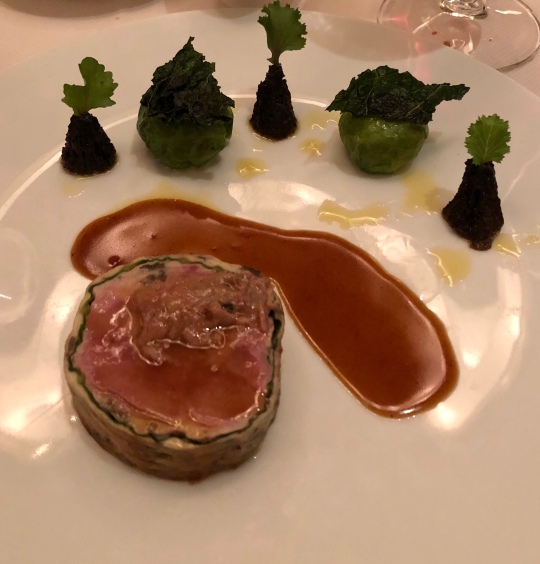 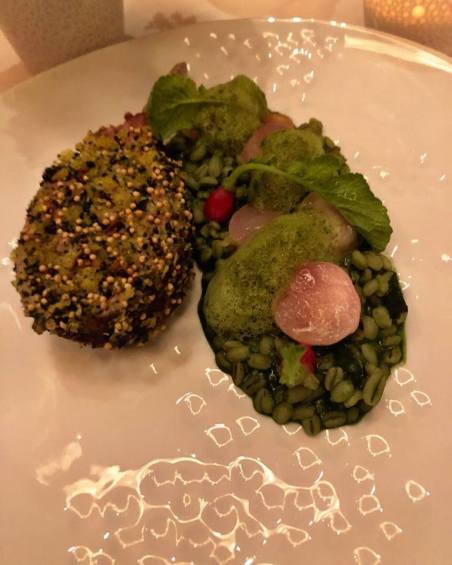 Throughout the course of the evening, the bread server came out numerous times to offer us a variety of options, which we gobbled down like there was a bread shortage somewhere in New York City. The brioche was warm, with a delightful crispy, slightly buttery outside with warm, delicious dough on the inside and the Parmesan bread had the most delightful flavor of Parmesan and fluffy ‘cloud like’ dough.

Finally, came the best part of the evening, the wonderful finale, dessert. The dessert menu was unlike anything I had ever seen before (and apparently it changes often!). We decided to order four different desserts and do a ‘musical dessert’ so that we could all try one another’s. The pistache was a definite favorite. It was pistachio ice cream in a hard chocolate casing with salted caramel and praline with a sweet and savory dash of ice cream on the side. Another dessert was a unique taste on lemon meringue. The dish came with two little hardened shells of meringue, with a lovely dash of lemon on the inside. As with most Michelin restaurants, little compliments from the chef were aplenty. We were bestowed with warm madeleines (lightly browned pieces of dough, shaped similarly to muffins, dusted with powered sugar), along with a plate of homemade chocolates and little ‘Daniel’ boxes to take home that were filled with little cakes dusted in brown syrup. 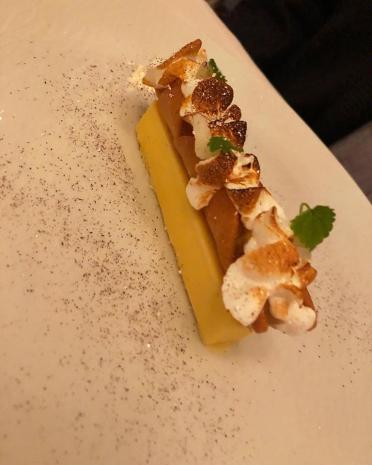 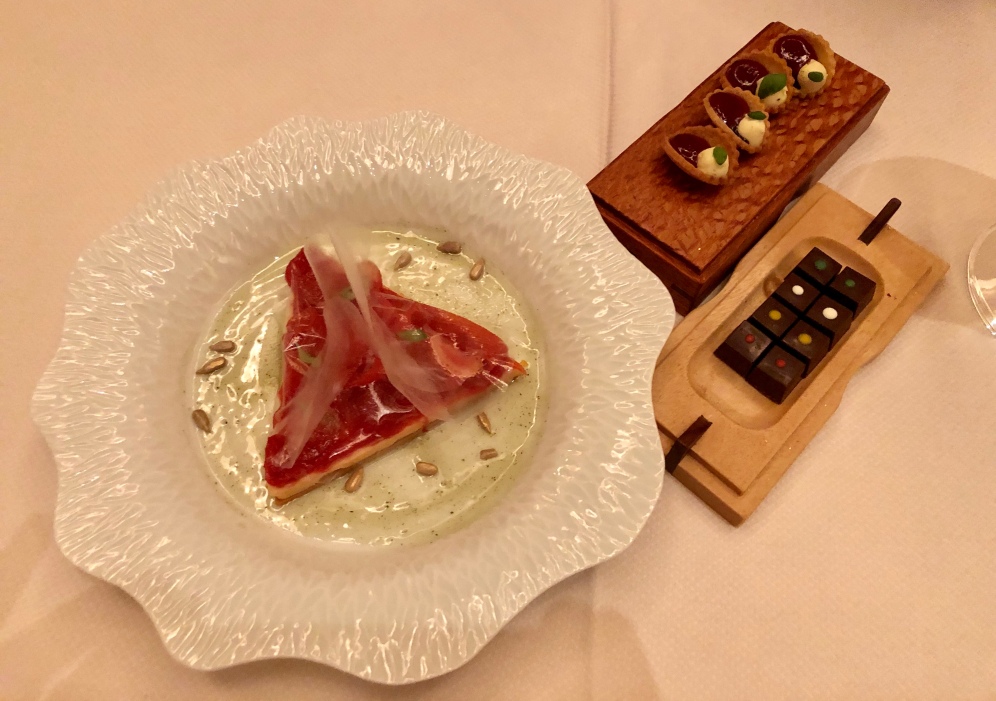 After the meal, Chef Daniel Boulud came out and said hello and offered to briefly show us the kitchen. The kitchen staff were busy at work, winding down for the evening, and thoroughly cleaning and re-cleaning every nook and cranny of the kitchen, but most were happy to say hello. As you would expect, the kitchen was impeccable, with ‘Michelin two stars’ signs hanging front and center. Chef Daniel was more than hospitable and was happy to briefly chat with us and take pictures. He also pointed up to the Skybox and joked that we needed to eat there next time as we could watch the chefs prepare our food for us. (Funny he mentioned that, as there was a table of four eating front and center in the kitchen when we arrived. Best table in the house for sure! Overall, it was a spectacular meal. The service was outstanding, the food was incredible, the ambiance was second to none. Just about everything was as close to perfection as humanely possible. A highly recommended dinner for your next celebration (or a random Monday evening, who’s judging?!) 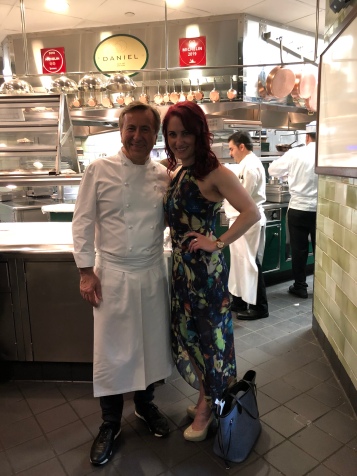